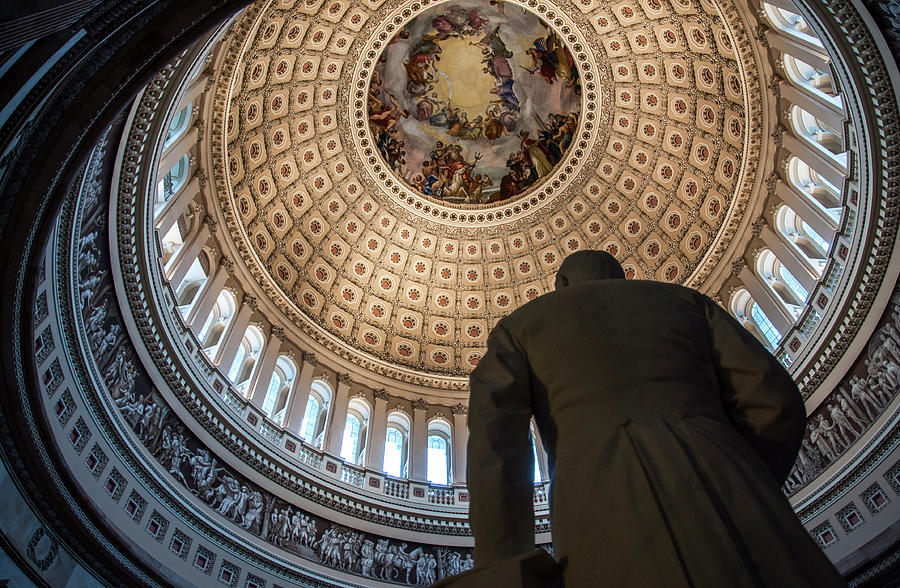 I took this image from this perspective to reflect the fact that all of us should remember the lofty goals of our founding fathers. Yes, they bickered and denounced each other just like politicians today, but what they created in the Constitution is unique and should be sacred to all of us. We may never reach the high goals of that document, but hopefully we will always keep trying, and get closer. The Apotheosis of Washington depicts George Washington sitting amongst the heavens in an exalted manner, or in literal terms, ascending and becoming a god (apotheosis). Washington, the first U.S. president and commander-in-chief of the Continental Army during the American Revolutionary War, is allegorically represented, surrounded by figures from classical mythology. Washington is draped in purple, a royal color, with a rainbow arch at his feet, flanked by the goddess Victoria (draped in green, using a horn) to his left and the Goddess of Liberty to his right. Liberty wears a red Phrygian cap, symbolizing emancipation, from a Roman tradition where sons leaving the home and/or slaves being emancipated would be given a red cap.

Forming a circle between Liberty and Victory are 13 maidens, each with a star above her head, representing the original 13 colonies. Several of the maidens have their backs turned to Washington, said to represent the colonies that had seceded from the Union at the time of painting.

Congratulations, your important reminder is featured on the home page of the quadruple-curated group, All Stars. Featured images are changed weekly, so for your image to remain visible for potential buyers who visit the group later, please post your featured images in the discussion thread titled FEATURED in FAA-Pixels All Stars in 2020.

Ginger, Great shot love the angle of this photo LF

Ginger, Wonderful image love the angle of this photo and the perspective on it LF

Nice perspective Ginger. I had to take a second look, because I knew this scene in the Capitol building.