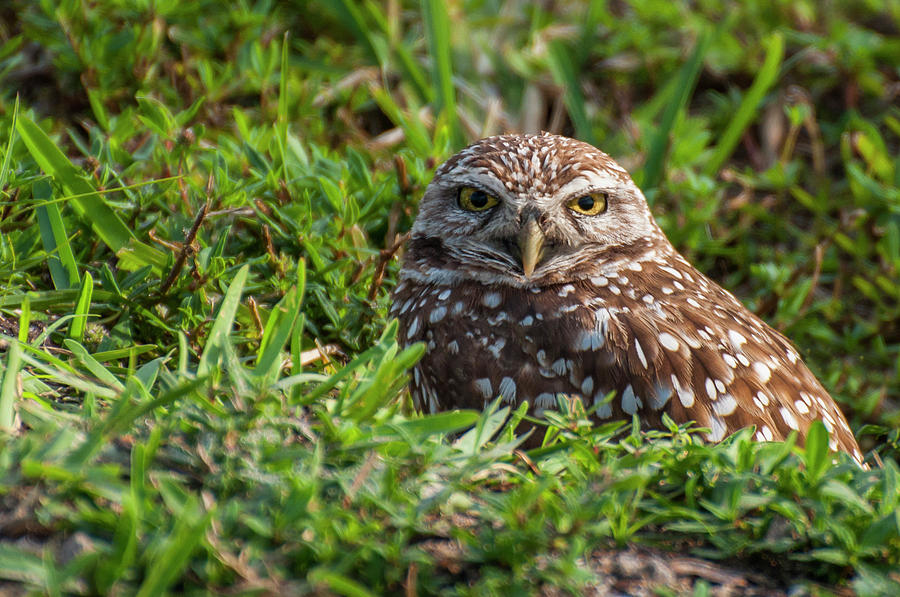 The burrowing owl (Athene cunicularia) is a pint-sized bird that lives in open, treeless areas in several places throughout Florida. The burrowing owl spends most of its time on the ground, where its sandy brown plumage provides camouflage from potential predators. One of Florida's smallest owls, it averages nine inches in height with a wingspan of 21 inches. The burrowing owl lacks the ear tufts of the more familiar woodland owls. Bright yellow eyes and a white chin accent the face. Unusually long legs provide additional height for a better view from its typical ground-level perch. The diet of the burrowing owl primarily consists of insects; however, they will also feed on snakes, frogs, small lizards, birds, and rodents. .

The typical breeding season for the Florida burrowing owl is February 15 to July 10, though owls can breed earlier or later. Nesting occurs in burrows in the ground that they dig. These burrows will be maintained and used again the following year (Haug et al. 1993). Females lay up to eight eggs within a one-week period, and they will incubate the eggs for up to 28 days. Once the white-feathered juveniles are born, it takes two weeks before they are ready and able to appear out of the burrow. Juveniles will begin learning how to fly at four weeks, but will not be able to fly well until they are six weeks old. Juveniles will stay with the parents until they are able to self-sustain at 12 weeks old.

Burrowing owls are different than other owls as they are active during the day time (diurnal) rather than at night (nocturnal) during breeding season. During the non-breeding season, they become more nocturnal. They were recently placed on the Florida threatened species list since construction often destroys their habitats.