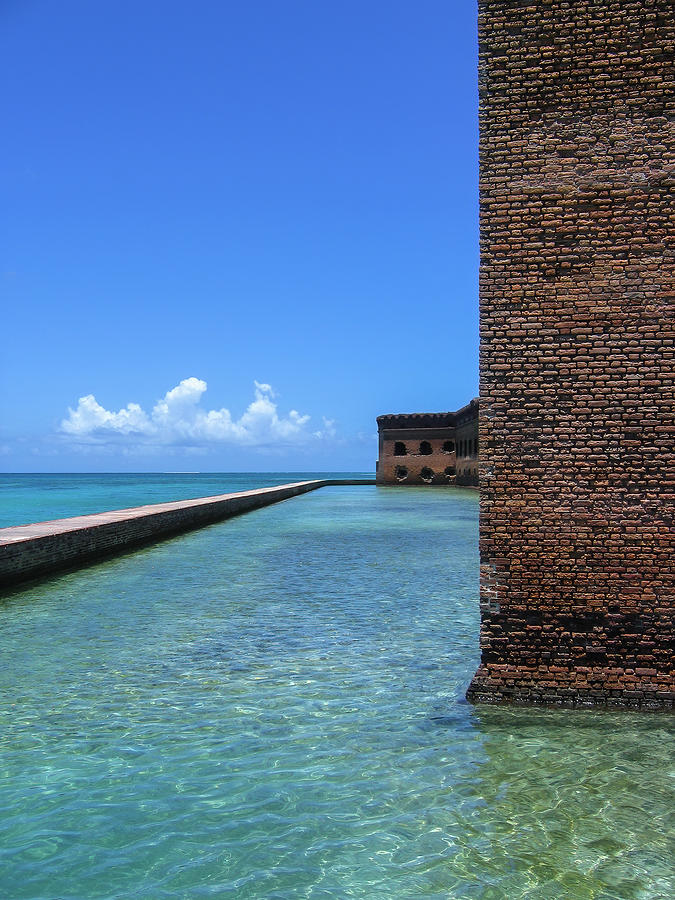 Dry Tortugas National Park is about 30 southwest of the tip of Key West, Florida, USA. Its fascinating to tour a fort that literally appears to grow out of the water. There is very little land that it can claim as its territory. Eleven small spits of land that were used as a Union prison during the Civil War. Its most famous prisoner was Dr. Samuel Mudd; the doctor who attended to John Wilkes Booth, the assassin of President Abraham Lincoln. The tour given by the National Park Rangers is fascinating if you are interested in history. Any visitor has to wonder how the regiment and prisoners survived with no source of potable water other than cisterns, how boring it must have been, and how terrifying it was when violent storms threatened to just wash over the barricades. After the Civil War it was used as a coaling station, as a Marine quarantine hospital, and briefly as a post during the Spanish Civil War in 1898. In 1902 the property was transferred to the Navy Department, and coal rigs and water distilling plants were built. When these were destroyed by hurricanes in 1906, the fort was again abandoned. Two years later the entire group of islands was set aside as a Federal bird reservation. Until 1934 the crumbling ruins were merely a rendezvous for fishermen and tourists.

During WWI, the lighthouse was decommissioned, but a wireless station and naval seaplane facility was operational. It received National Park designation in 1992. It can be reached by seaplane, private boat, commercial seaplane or catamaran from Key West.
FEATURED IN:
--Best of Minimalism 6/13/19
--The Coastal Areas of the Gulf of Mexico 11/06/19

Ginger, Beautiful find and such a clear image LF

Wonderful rendition of this historic piece of Florida.....

Neat use of horizontal and vertical lines and colors. Well Done Ginger L.

This is really cool!

Unusual but very effective composition and absolutely yummy colors - what a great combination of shapes, textures, and tones, Ginger. This was one of my two pod's in the Best of Minimalism group for June 7.