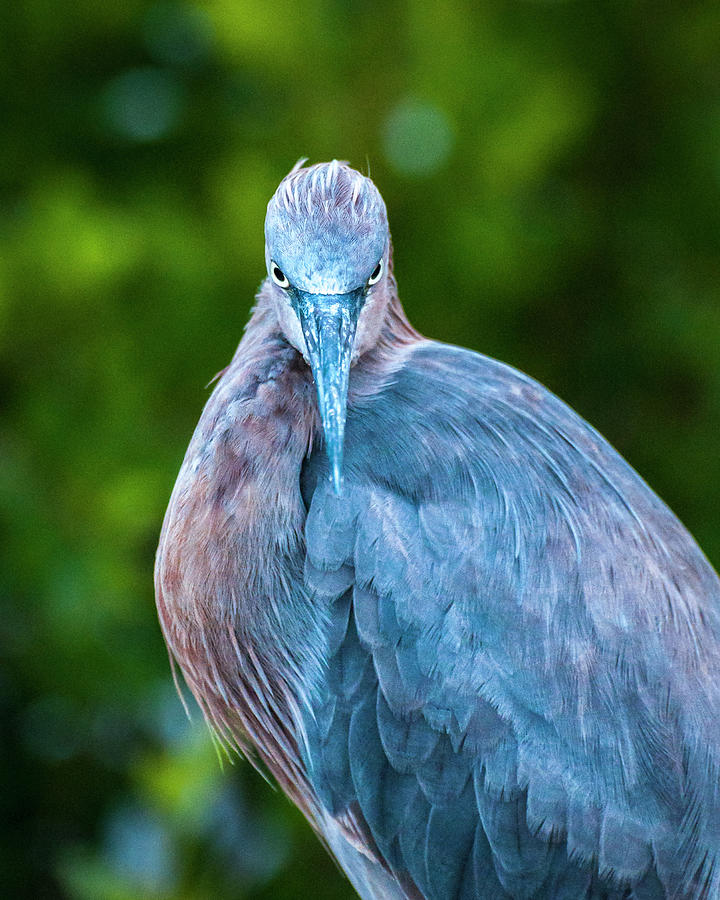 This little reddish egret hung around a fisherman for hours waiting for a bite of bait. He clearly thought I was competing for his territory when he pointedly gave me this look. Sanibel Island, Florida, USA.
The reddish egret (Egretta rufescens) is a medium-sized heron. It is a resident breeder in Central America, The Bahamas, the Caribbean, the Gulf Coast of the United States, and Mexico. In the past, this bird was a victim of the plume trade.
According to the Texas Parks and Wildlife Department, there are only 1,500 to 2,000 nesting pairs of reddish egrets in the United States — and most of these are in Texas. They are classified as "threatened" in Texas and receive special protection.
The reddish egret is considered one of the most active herons, and is often seen on the move. It stalks its prey visually in shallow water far more actively than other herons and egrets, frequently running energetically and using the shadow of its wings to reduce glare on the water once it is in position to spear a fish; the result is a fascinating dance. Due to its odd movements it can remind one of a gawky teenager. It eats fish, frogs, crustaceans, and insects. The bird's usual cry is a low, guttural croak.
FEATURED IN:
-- USA Photography 2/01/2019

Congratulations on your well-deserved sale.

congrats on your sale LF

Congratulations on your sale!

Congratulation on your sale. L

Congratulations on your sale.

congratulations on your sale!

Lovely closeup! Thank you for submitting your named wild bird image to Wild Birds Of The World - A Nature Photography Group, where the image is now featured on the home page. L/F

Wow love that GLARE!!! Awesome capture! This will be the “Out Of The Ordinary”” photo of the day on the USA Photographers group home page for 2/1/19!